All articles tagged with "Crush Fetish"

Goddess Nika felt that she needed to make sure her hands were as great as they could be. And that is why she chose to pamper them in order to get them ready. The mistress rubbed them, moisturized them and made sure they were looking sexy and were as soft as possible as she wanted them ready for her hand fetish. She then manicured them before she felt she was done.

When this mistress noticed that this guy was taking advantage of her and she had to teach him a lesson, she felt that the best way to do it was to use her hands to beat the shit out of him and humiliate him. So she choked him a little and when she was done with that, the mistress also went ahead to spit on her hands and make him lick the spit.

This guy tried messing with this mistress but she just laughed at him. He tried it again and she felt that he was going too far. So she played with her hands and clasped her hands in a way to show him her sharp nails. And then she told him to imagine those nails on his balls and on his dick, digging deep into his skin. He did not wait for her to finish her narration.

Goddess Nika felt that this guy was missing out on a lot of things and she had to make sure that he did not miss out anymore. So she used her hand fetish to teach the guy to have fun with his hands. She teased him after which she made him satisfy himself with his hands but with guidance from her as he did not know how to expertly satisfy himself.

This mistress is a bully and she loves to scare people for sport. And that is what she did to her neighbor after she realized he was a loser. She used her high heels to scare the shit out of him but this was after she had put on a show for him. The mistress told him that the show was for him but the payment for the show was the scare he got from her.

Mistress Gaia did not want to have anyone forgetful working for her and so she put him to task. He struggled to remember things and she helped him work on his problem. But she was shocked that he did not put more effort and so she had to change tact. She did this by using her hand fetish to dominate and humiliate him. She did so painfully by crushing him and hand smothering his face, neck and balls.

Mistress Anfisa had heard about hand fetish but she had never tried it. And today she wanted to try it out as she felt that it could be a lot of fun. So she picked a day she was not too busy and she had a great time learning the ins and outs of hand fetish. She had thought it was easy but later realized that it was not and he gained new respect for it. 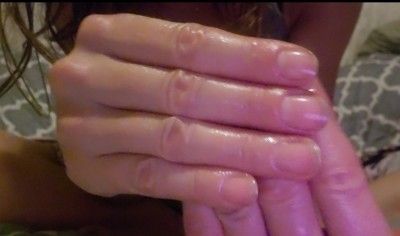 Lady Sara pampers hands to make them great for handjobs

Lady Sara loves to give handjobs and today she wanted to give one to her boss because she wanted to control him and one of the ways to do that was to make sure he was satisfied sexually so she used her hands which were soft and sexy to make him have the time of his life. As he enjoyed the rubbing he got from her, he knew he had found something to enjoy for a long time to come.